Join BookTowne and The Brielle Public Library on Zoom with NYT Bestselling Author Megan Miranda and her new novel The Girl From Widow Hills! 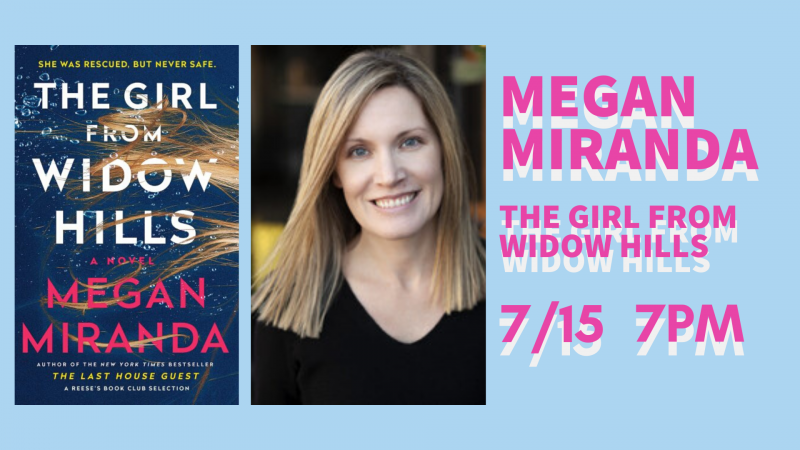 Tickets: Purchasing The Girl from Widow Hills from BookTowne gets you on the list for this event! We will send out a Zoom link and password as we get closer.  Click "add to cart" at the bottom of this page to purchase!

From the New York Times bestselling author of The Last House Guest—a Reese Witherspoon Book Club pick—comes a riveting new novel of psychological suspense about a young woman plagued by night terrors after a childhood trauma who wakes one evening to find a corpse at her feet.

Everyone knows the story of “the girl from Widow Hills.”

Arden Maynor was just a child when she was swept away while sleepwalking during a terrifying rainstorm and went missing for days. Strangers and friends, neighbors and rescue workers, set up search parties and held vigils, praying for her safe return. Against all odds, she was found, alive, clinging to a storm drain. The girl from Widow Hills was a living miracle. Arden’s mother wrote a book. Fame followed. Fans and fan letters, creeps, and stalkers. And every year, the anniversary. It all became too much. As soon as she was old enough, Arden changed her name and disappeared from the public eye.

Now a young woman living hundreds of miles away, Arden goes by Olivia. She’s managed to stay off the radar for the last few years. But with the twentieth anniversary of her rescue approaching, the media will inevitably renew its interest in Arden. Where is she now? Soon Olivia feels like she’s being watched and begins sleepwalking again, like she did long ago, even waking outside her home. Until late one night she jolts awake in her yard. At her feet is the corpse of a man she knows—from her previous life, as Arden Maynor.

And now, the girl from Widow Hills is about to become the center of the story, once again, in this propulsive page-turner from suspense master Megan Miranda.

Megan Miranda is the New York Times bestselling author of ALL THE MISSING GIRLS, THE PERFECT STRANGER, and THE LAST HOUSE GUEST, a Reese Witherspoon Book Club pick. She has also written several books for young adults, including COME FIND ME, FRAGMENTS OF THE LOST, and THE SAFEST LIES. She grew up in New Jersey, graduated from MIT, and lives in North Carolina with her husband and two children.

The Girl from Widow Hills: A Novel (Hardcover)

Purchasing a copy of The Girl From Widow Hills above will act as your ticket into this event. We will email out a Zoom link and password as we get closer to the day of the event.