This event is currently sold out. The page will be updated if more tickets become available! 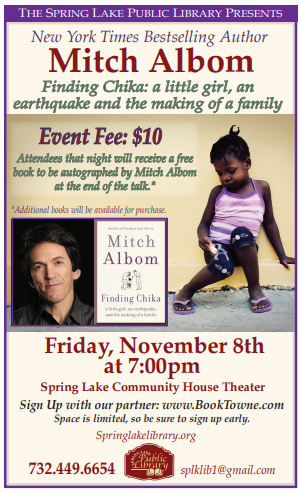 Maximum of four tickets per person. Larger groups will have to purchase tickets separately.

But they are all real. Chika was a daughter to a number of people. And for the last two years, she was ours, gloriously ours…

We did not lose a child. We were given one.

Chika Jeune was born three days before the devastating earthquake that decimated Haiti in 2010. She spent her infancy in a landscape of extreme poverty, and when her mother died giving birth to a baby brother, Chika was brought to the Have Faith Haiti Mission & Orphanage that Albom operates in Port-au-Prince.

With no children of their own, the forty-plus children who live, play, and go to school at the orphanage have become family to Mitch and his wife, Janine. Chika’s arrival makes a quick impression. Brave and self-assured, even as a three-year-old, she delights the other kids and teachers. But at age five, Chika is suddenly diagnosed with something a doctor there says, “No one in Haiti can help you with.”

Mitch and Janine bring Chika to Detroit, hopeful that they can get the medical help needed to return her to a healthy life in Haiti. Instead, Chika becomes a permanent part of their household, and their lives, as they embark on a two-year, around-the-world journey to find a cure for an inoperable brain tumor. As Chika’s boundless optimism and humor teach Mitch the joys a child brings to their lives, he learns that a relationship built on love, no matter what blows it takes, can never be lost.

Told in hindsight, and through illuminating conversations with Chika herself, this is Albom at his most poignant and vulnerable. Chika is a celebration of a girl, her guardians, and the incredible bond they formed—a devastatingly beautiful portrait of what it means to be a family, regardless of how it is made.

MITCH ALBOM is an internationally renowned and best-selling author, journalist, screenwriter, playwright, radio and television broadcaster and musician. His books have collectively sold more than 39 million copies worldwide; have been published in forty-nine territories and in forty-five languages around the world; and have been made into Emmy Award-winning and critically-acclaimed television movies.

Seats are general admission, and the $10 Event Fee is nonrefundable. Every person that attends this event will receive a copy of Finding Chika as a gift from The Spring Lake Library:  This book can be autographed by Mitch Albom after the event, and additional books will be available for purchase.